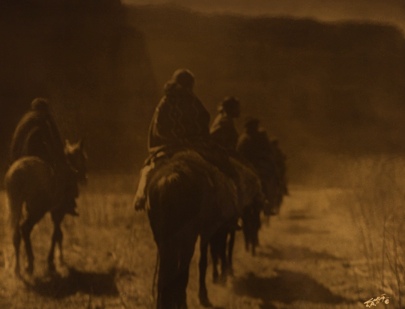 1904
Plate 1 from Volume I of Edward S. Curtis’s
The North American Indian

Read More
Probably the most celebrated and emblematic image of Edward S. Curtis's work, which he himself chose as the opening photograph for the first volume of "The North American Indian" portfolio.

Curtis's original orotones such as the one presented here are the most rare and sought after works of this major photographer.

The Curtis caption for this image (original tag on the back of the frame) reads:
"The thought which this picture is meant to convey is that the Indians as a race, already shorn in their tribal strength and stripped of their primitive dress, are passing into the darkness of an unknown future. Feeling that the picture expresses so much of the thought that inspired the entire work, the author has chosen it as the first of the series."